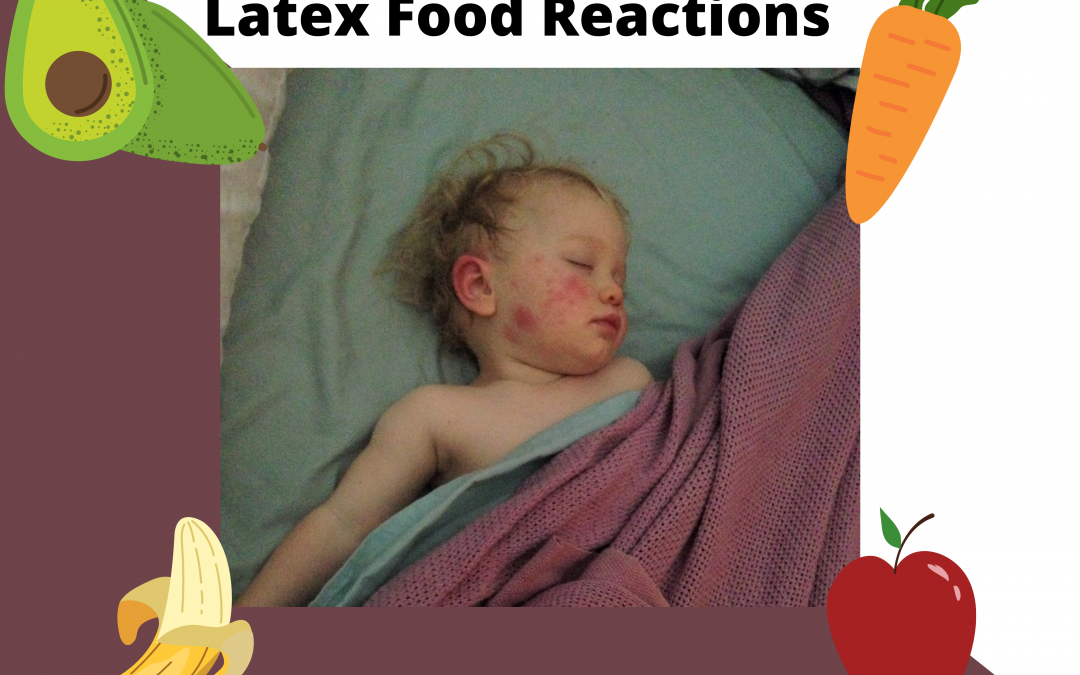 This episode was very personal to share. I chat with my little one about “facey rash” and our journey in discovering Latex Food Reactions.

00:05
Hey, thanks for joining me on incrEDIBLE family health with Cheree Sheldon. I’m a naturopath, nutritionist and chef. But my most important role is Mum, I want to focus on getting your family healthy. I’ll do this by sharing tools and strategies I’ve learned to benefit my family’s well being and pass them on to you. You’ll also gain incredible insights from other professionals and parents who can help you live healthier lives.

C: Hello, thanks for joining me again on incrEDIBLE family health with Cheree Sheldon. I’m going to talk to my little, little daughter today. I’m going to talk to Sage, Sage’s three and a half. And she’s going to explain a little bit about what we called facey rash. Which was her food intolerance reaction to foods that were related to latex.
S: Facey rash is bad.
C: Yeah
S: it makes you itchy
C: It’s itchy. And what gives you facey rash?
S: Um, nana’s.
C: Yeah, What other food?
(other kid in background) apple
C: Apple was one Yep. Carrot. Banana
S: banana.
C: avocado.
S: Avocado
C: Do you remember what your facey looked like?
S: Yeh, it looks red.
C: Yeah, it was all red and itchy, wasn’t it? Your facey rash was because those foods have something called latex in them. And that’s why do you know what? Sometimes I have to get a special band aids for you too, because band aids have also have latex in and if you have a latex Band Aid makes your skin red and itchy as well. But do you know what we did to make? Make your tummy healthier? So you can now eat all of those foods? Because you can eat Nana now can’t you?
S: Yeah
C: and apple?
S: Yeah
C: We gave you some ..What do we call supplements that we have at night?
S:Umm, media
C: Yeah, we have media. Yep. So I gave you media that’s gonna help your tummy
S: Oh
C: Yep, be all healthy on the inside. And that made you be able to not get that face rash when you eat that food anymore.

11:28
I think the first food we asked Sage what she wanted to reintroduce was apple. And she was fine. She had no reaction. And we’ve Yes, we’ve done this, this is awesome. And slowly, we started to be able to introduce a few more things, she still doesn’t enjoy tomato like she won’t have a cherry tomato. Yet, even though she helps pick them, we grow them in the garden, she loves picking them. She’s sort of puts it to her mouth. And then she’s like, Oh, I’m not ready for this and puts it down. But we have tomato paste and tomato possata in that are the meals and totally fine with that. The only thing that we’re not quite there yet for his banana, and she loves it. However, if we put a little barrier cream, I get the Weleda Skin Food. It’s such a nice product. And we sort of just smooth that around her lips and up a bit of her cheeks. That barrier stops that reaction. That’s incredible. And was so so pleased with her response and how it’s gone. And so I’m sharing this with you because I didn’t know about this, this latex reaction until it happened to my child. But since then, I’ve been able to sort of diagnose it in quite a number of children that have come to me with skin complaints in in clinical practice. And by removing those foods and doing the same sort of gut healing, it’s made such a difference to their skin health. So you to consider that. If your child’s having food reactions, particularly face reactions. Then getting the list of latex foods and I’ll pop it on the website, I’ll write a little blog about it and pop it on you’ll be able to find it and and just removing those for a short period of time and reintroducing and seeing if that reaction happens, then you’ll be like, okay, we’re on the right path here. And then you can target things. It’s that educated guesswork, fine tuning what to target. And then really, really pinpointing what to do about it can make a difference. And as you heard from Sage before, she’s cool now it’s so good. Thanks for listening to my health journey. And, you know, our journey to incredible Family Health. It’s definitely up and down, as I’m sure yours is. And I hope that’s made a difference to your family’s journey as well. Thanks, bye.

14:02
We love helping to create your incrEDIBLE family health. To help our ratings stay healthy on iTunes. Please rate and review wherever you listen